Hands Of Sinners created by ProjectX 7 years ago 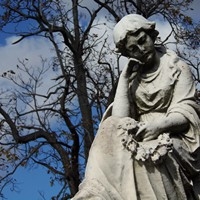 Hello everyone and welcome to the very first song of the new released album (finally), "Blood of Angels"!! I have been waiting a long time to start thing album but i don't know exactly what i want for it which in turn is probably the best part! this album will consist mostly of Bells, Piano, Strings, as well as some Orchestral and Lead mix.....and i'll throw in some guitar and bass here and there. Anyway, thank you all so much for joining me on this wonderful journey to the more heavenly side of the music world here on MusicShake!! Please like, fav and most of all enjoy!!!^^

-I would like to start the religious aspect behind this (and the rest of these) song(s). Please no negative comments, just your thoughts and opinions on what i say or what you think.-

To start off, I am Roman Catholic/Christian (or whatever i don't know anymore nor care, they are the same to me) so its going to be from that perspective.
Anyway, as you hear in the beginning, Church bells are going and its raining as well as a statue (my image) and a woman who is crying. The imagery i had was of a woman crying in a graveyard because she lost someone who she loved however, this person sinned all throughout his life. As the music goes on, I leave it us to you guys to decide the story of how and why the man sinned so much and the cause of his departure. As for me, my interpretation is that his life was a living hell from the beginning and as he grew older, all the bad habits he had stuck with him. He has committed numerous acts of violence, murder, theft, sexual assault, vandalization and so on. He even tries to get help in various ways, but to no avail. When he is realizes that there is no way to save himself from all that he has done, he commits suicide.
However, instead of seeing fires and endless torment, he is greeted with a calm relaxing riverside with birds above and a nice warm day. (Oh and the crying woman over his grave....was the Mother of God-- Mary).

The question is: Just because he took his own life, does that mean he is going to hell?

Thank you so much for not only reading but listening to the first song of my new album, Blood Of Angels! Please like and comment your thoughts on what you think this song represents!

We Will Rise Again

From Me To You