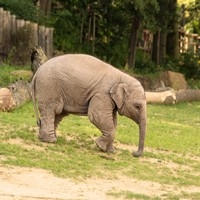 Dell: Ellie, may you take Tammy, Mime and Paul to come with you while you are on the transit bus to the Musicshake concert?
Ellie: Oh sure! Which contributor is going with me?
Dell: The contributors are driving the others, so you must be responsible for this.
Ellie: Alright.

*At the bus station*
Tammy: Oh goodness! How many hours have we been in here?
Ellie: We've been here for only 15 minutes Tammy, the bus will always come here, I swear!
Tammy: Well, it better be here! Why won't you try my delicious cookie I made?
Ellie: Well...I guess so...
*Ellie takes a cookie from Tammy and eats it, she found out how delicious this cookie was, but then she realize when Tammy tells the ingredients that this have dirty snow in the cookie*
Ellie: *Spits out cookie* DIRTY SNOW!? TAMMY YOU ARE GROSS!
Tammy: Hehe, always the gross one.
Mime: Guys, the bus is coming, get your tickets out!
Paul: I'm cold...
Mime: Paul, don't worry, we will be warm as possible.
*Mime hugged Paul as soon as the bus comes. They all entered in the bus and sees people older than them, they find a seat separately, except for Mime who was hugging Paul. 3 hours later, while the bus is driving,suddenly, a blackout randomly appears and everyone started to panic, the bus driver came to command.*
Bus driver: Everyone, don't panic, it is just a bla-
*He was interrupted and the next thing everyone noticed,he was gone unconscious, another blackout appeared, and everyone went unconscious. After that blackout, Paul woke up when he open his eyes and we was in the middle of the snow...of nowhere. Paul was a little frightened and find his way back to the bus. After 2 hours, Paul kept walking and kept walking until he noticed he gets a frostbite, be he continues on.*

*During song*
*Paul notice Tammy flying around like an idiot or looks like she took drugs. Paul heads to Tammy and tells her to come with him to find the rest. They both saw Ellie, standing there for a while and both Paul and Tammy ran up to Ellie. They were scared that Ellie was frozen, but luckily she was alive. She noticed the two telling her to find the last person: Mime. But Ellie notice the moon was telling her something to tell what is going next, she then realized that Mime is going to fall in the snow. The three ran to find her and they did, but they were worried about her, she...was unconscious.*
Paul: Hurry! There is the bus, and the people who were part of the blackout are there. Let's go!
*They all ran into the bus, Ellie was carrying Mime with her*
*Music Ends*
*During in the bus, everyone looked tired and they all are at the Musicshake Concert when they got off the bus. Paul started crying because he is worried about Mime. Tammy and Ellie felt depressed about her too. As they entered in, a Musicshaker comes.
Musicshaker: What happened to this poor young lady?
Paul: S-She W-was...U-u...
Ellie: Paul, its okay, let me explain.
*She explained to the Musicshaker about Mime, they Musicshaker accepts what she said and took Mime to the doctors room. Sadly, after the doctor find the symptoms, he told to the Musicshaker and the three.
Doctor: I am sorry guys, Ms. Mime here will have to stay here for a while, you might need to do some changes for your performance.
All: We understand.
Musicshaker: Well...I guess we have to do this without Mime.
Tammy: Poor her...
Ellie: I don't even know what to do...
Paul: *Starts to cry* WHY!? WHY HER!? SHE WAS LIKE A SISTER TO ME WHEN WE ARE AT THE YTA! WHY HER!? IT SHOULD'VE BEEN ME! WHY!?
The Musicshaker comforted Paul, then they started training...without Mime...

Question: Do you think Mime will stay alive pr make it to be performing on the concert? Why or why not?

When It's Morning (COMEBACK)

A Little Bit Of Dance